The 2022 season will conclude on Sunday against the Pittsburgh Steelers, and as rocky as it was for the Cleveland Browns there has been one solid and continuous bright spot: quarterback Jacoby Brissett. He knows his time in Cleveland is likely over, but Brissett has stated that he will cherish his time with the Browns.

Starting the first 11 games of the season, Brissett set a career-high pace across the board, led the Browns to a top-10 offense and to a record of 4-7 in his tenure. He spoke to the media yesterday and was emotional as his season comes to an end:

“It’s been awesome… It’s been nothing short of that. The highs and lows, ups and downs, the relationships, the things you get to experience in an NFL locker room and being able to start and play good football, it’s been a lot of fun. It’s something I for sure will cherish.”

Here are some other quotes from Brissett’s media availability as he soaks in his remaining time in Cleveland.

An ode to Jacoby Brissett: His 5 best plays as the starting quarterback 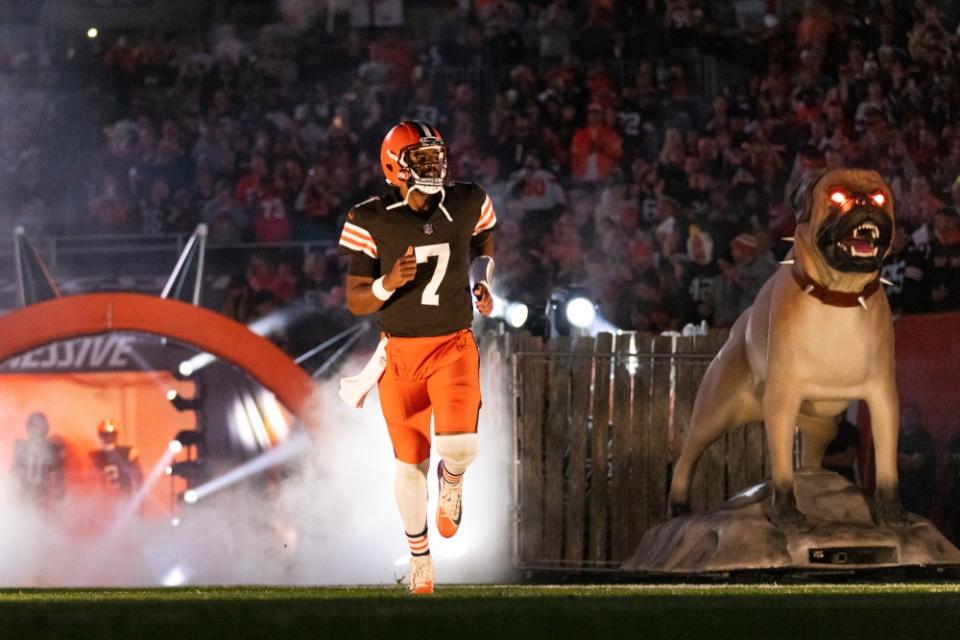 "I feel like that holds more weight to me than wins or losses and things of that nature... Hopefully in the next couple days, I can get that answer if I was a good teammate or not."

Everywhere Brissett has been, every locker room Brissett has had a locker in, one thing continues to ring true: he is the ultimate teammate. Whether he is throwing a lead block for Anthony Schwartz on a touchdown run, if he is gaming his teammates on the basketball court, or if he is just cracking jokes in the locker room, his personality is infectious.

As Brissett rattled off this quote to the media, running back D’Ernest Johnson interjected and yelled, “You’re a great teammate, bro.” Brissett then jokingly offered to buy Johnson’s dinner for his remarks.

A true leader in the locker room, the presence of Brissett will be hard to replace.

"Just trying to be a good person and be there for guys..."

What Brissett signed up for this season is not for everybody. Coming into his one-year deal with the Browns, Brissett knew his tenure as the starting quarterback would come to an end in the same season.

And he chose to be a part of this experience anyway.

Brissett can still be seen on the sidelines hyping up his teammates after a big play, his energy is infectious when he comes on the field for a short-yardage quarterback sneak. He is still the leader he was the first 11 games of the season, even if his role on the team is drastically different.

"I've learned a lot about myself and this game... I'm excited for what the future holds, but I'm excited I got to do this experience."

He has started full seasons for the Indianapolis Colts, he has spot started for the New England Patriots and Miami Dolphins as well. If someone said Brissett would pace himself into career-high numbers before the season started (if he had played a full-season sample size), I would not have believed that person.

The Browns have the word “work” posted all over their facility, as well as, “tough, smart, accountable.” Brissett has personified the mission of head coach Kevin Stefanski this season for the Browns both on and off the field.

He took his game to another level and now has put himself back in a position to make a lot of money this offseason.

"Who knows... This league is crazy, right? A lot of things have happened. I wouldn't be me if I were worried about that."

Brissett has not ruled out a return to Cleveland:

“Who knows… This league is crazy, right? A lot of things have happened. I wouldn’t be me if I were worried about that. Right now, at this point in my life, those things will happen if those things are meant to happen. I’ll be where I’m at.”

However, as there are a handful of quarterback-needy teams, Brissett is in a position to cash in and act as a bridge quarterback for one of these franchises that draft a rookie they want to ease into the starting lineup. Who knows? There are probably franchises punting on this season to take Caleb Williams or Drake Maye as well that may ask Brissett to hang around on a multi-year deal.

And Brissett has earned and deserves every penny he makes this off-season. If that means his time in Cleveland is over, then good for him. Even in his one year in Northeast Ohio, Brissett will go down as a fan favorite, the ultimate teammate, and a Browns legend.