In 1992, late New Jersey Nets legend Drazen Petrovic finished seventh in the NBA's Three-Point Contest, a disappointing showing considering his 44 percent mark from behind the arc that year was second only to Dana Barros' 46 percent pace. Petrovic, who would not appear in the contest the next season, died in a car accident in Germany a year and a half later.

In 2012, another all-world shooter with a Nets pedigree will pay tribute to the late Petrovic during his turn in the shootout. New Jersey's Anthony Morrow will wear a Petrovic jersey during his turn at the racks, fitting not only because Morrow plays for Drazen's old team, but because Morrow's career 3-point mark of (you guessed it) 44 percent is on pace to rank him as one of the NBA's all-time greats from long range. Anthony, in talking to Mike Vorkunov of the Newark Star-Ledger, relayed just why he chose that setting to pay tribute to a legend from another era: 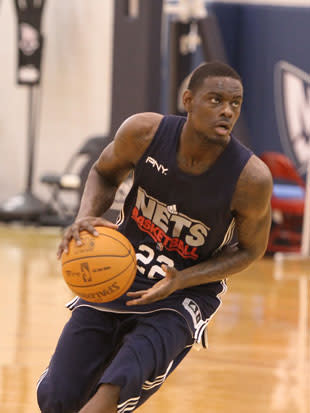 Morrow has had the idea since he saw Petrovic's jersey hanging in the Nets' practice facility. After seeing the documentary, "Once Brothers" -- about the broken friendship between Petrovic and Vlade Divac -- he thought that if he had the chance to participate in All-Star weekend, he would honor the fallen hero.

"I just remember -- I don't remember a whole lot -- but I remember he could shoot real, real good," Morrow said.

Morrow's appearance in the competition has been a long time coming. He's been an absolute demon from behind the arc since entering the NBA in 2008, and for some reason it's taken until his fourth season to get an invite despite nailing a ridiculous career average (the NBA average is around 36 percent) on the league's home run ball. With his 6-7 frame and consistent touch from behind the arc, the athletic Morrow is considered a favorite in the event.

To pay tribute to Petrovic, who was pacing the Nets with a 22-points-per-game average in the season before he left us, is beyond cool.