Georgia football is currently in fall camp preparing to defend their national title.

With three weeks till the Bulldogs tee it up versus Oregon in Atlanta for the Chickfila Kickoff game, there are questions surrounding the Dawgs’ running back room.

Talent is not the question here, but rather how upperclassmen like Kenny McIntosh, Kendall Milton and Daijun Edwards take over for Zamir White and James Cook, who are preparing for their rookie seasons in the NFL.

Running backs coach Dell McGee expanded on the backfield to the media earlier this week. 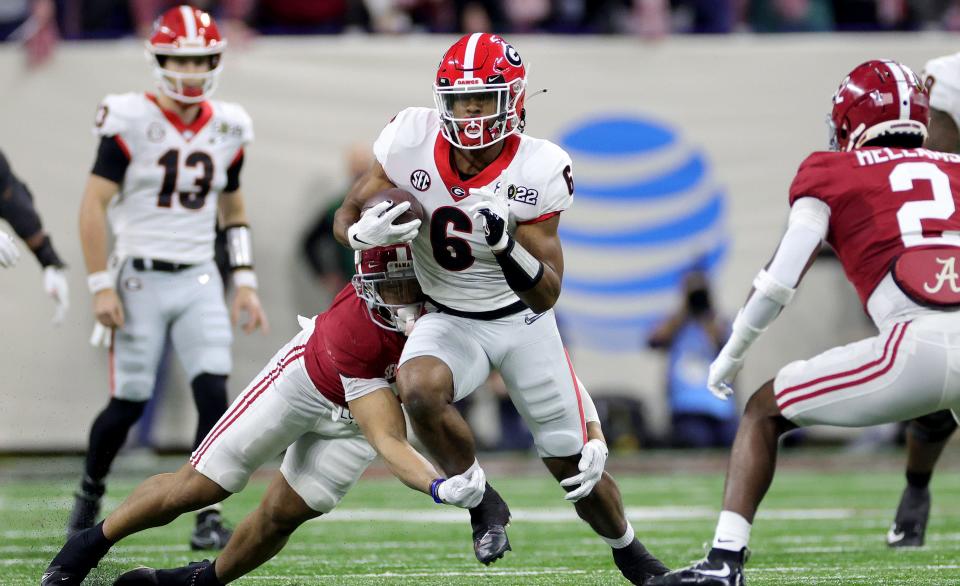 INDIANAPOLIS, INDIANA – JANUARY 10: Kenny McIntosh #6 of the Georgia Bulldogs runs with the ball in the second quarter of the game against the Alabama Crimson Tide during the 2022 CFP National Championship Game at Lucas Oil Stadium on January 10, 2022 in Indianapolis, Indiana. (Photo by Carmen Mandato/Getty Images)

“Kenny McIntosh, a senior, who had a really nice spring and showed a lot of leadership in the summer work program, and he’s doing a great job of mentoring the two young guys who had just come in in Branson Robinson and Andrew Paul. … He can do everything. He can run inside tackles. He can run outside tackles. He’s really good on the perimeter. He has really, really good hands, probably some of the best hands since D’Andre (Swift). He’s good at running routes. He’s a blitz pickup on third down, so he’s definitely a complete back. He’s learned a lot from James and Zamir.”

“He’s also a good example of, just like James and Zamir were, of staying the course, not being too anxious to enter the NFL or enter the transfer portal, just being patient. All of his hard work, and his patience will come and pay off this year, but I think the sky is the limit for him. He’s definitely going to be an integral part of our offense, and he will be relied upon heavily. He also adds value to our special teams as a kick returner.” 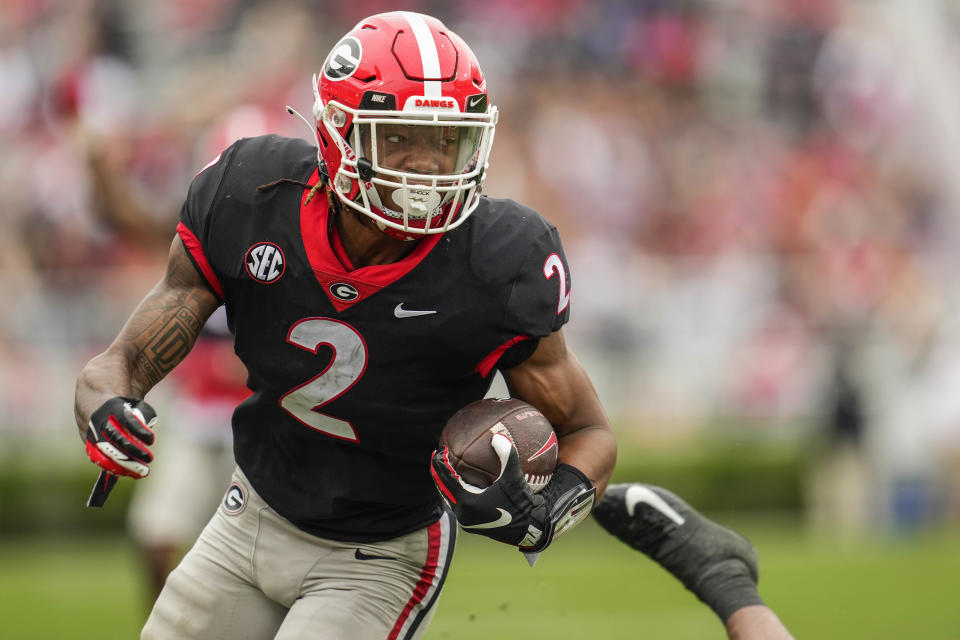 “Kendall Milton, a junior, who has suffered some injuries each year that he has been here. He’s been very healthy this spring, and he’s also been healthy this summer, so we’re looking for big things out of him, and he also serves in a leadership role because he had a chance to be led by Zamir and James, four-year guys, and Kenny. … He’s looked great during fall camp.” 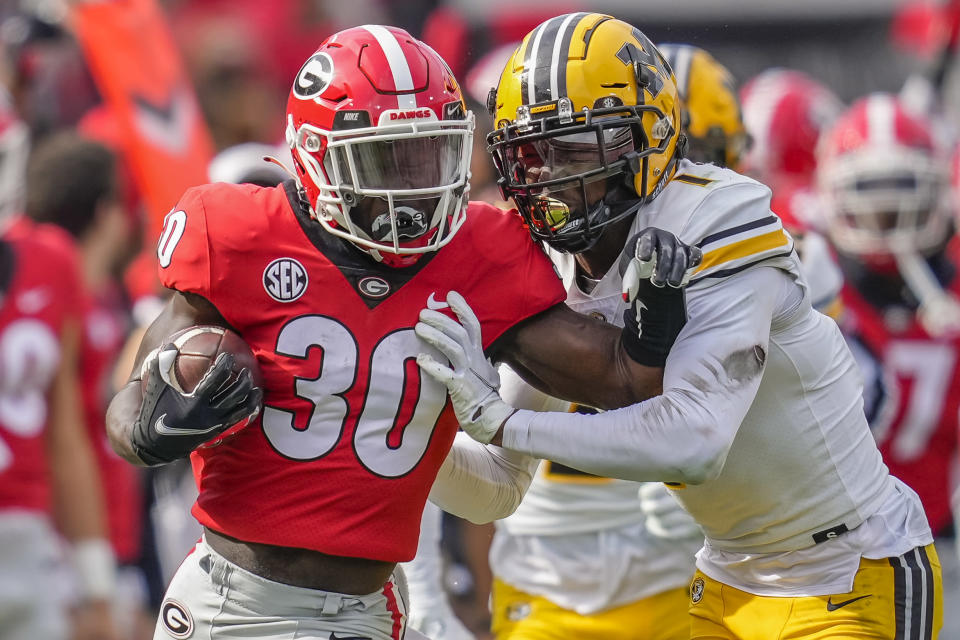 “Daijun Edwards (has been) a consummate student-athlete. He’s very unselfish, a team player, knows his role and fit. He’s going to be counted on as well this year because he adds value to our football team. … He’s really quiet. He’s not going to be a boastful guy. He doesn’t talk a whole lot. What you are going to get is what you see, based on what you’ve seen. He is very unselfish. He closed out a lot of games. He wasn’t a guy that was pouting because he didn’t get in earlier in the game.”

“He has value and has a role on special teams, and that’s a very, very important component of our success on the football field. He is going to be a competitor, and he is having a great camp thus far and he had a great spring, too, so we expect great things out of Daijun. He has graduated to a level where he is, level where he is going to get snaps.”

“He comes from a good high school program (Parish Episcopal School in Dallas, Texas) that won a state championship. He’s six-foot, 220 pounds, great size, has good speed. He’s a great kid from a great family. Very quiet, hard worker, so he fits all the character of things we’re looking for in our football players. We also needed another running back. We always like to keep five in our roster. Our lineup number is six, but we’ve been kind of shorting that number because of the talent that we’ve had in the (group). He’s just getting here. He wasn’t a mid-year (enrollee), so he’s behind from a mental standpoint. We’ll get a chance to evaluate him further in the scrimmage on Saturday, which I know all of our guys are looking forward to it.” 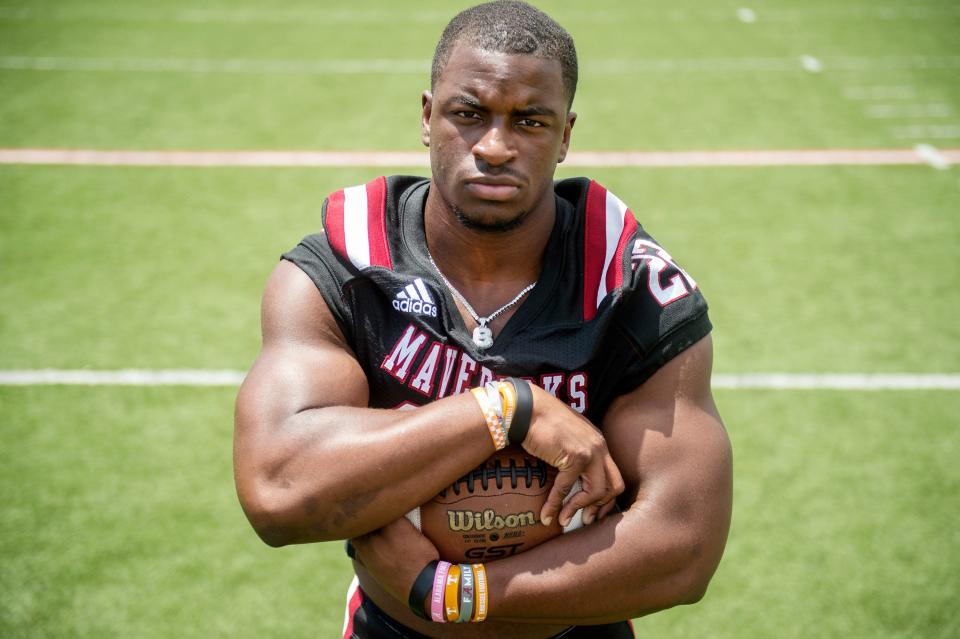 “Branson, the way he’s built, he’s built like a brick house. He doesn’t have a neck. He’s very similarly built in the shoulders like one of my old teammates, Takeo Spikes. Nick Chubb was a good-looking student-athlete as well. Branson is more than just muscle. He’s very dedicated. He works hard in the weight room, obviously, and in strength and conditioning. He’s a sharp young man with a lot of promise this year.”