Disgraced former NBA referee Tim Donaghy's new tell-all book, "Blowing the Whistle: The Culture of Fraud in the NBA," has been canceled by publishers over concerns of potential liability.

After reading some of the excerpts, this news comes as no surprise.

The book, obtained by Deadspin, details Donaghy's "dirty tricks" used for gambling on NBA games and the events leading up to his conviction on federal wire fraud charges.

According to Deadspin, it falls somewhere between a confessional and an indictment, both of Donaghy's former colleagues and their employer. The posted excerpts definitely run with the latter.

For example, here's Donaghy throwing Dick Bavetta under the bus:

"Two weeks before the 2003-04 season ended, Bavetta and I were assigned to officiate a game in Oakland. That afternoon before the tip-off, we were discussing an upcoming game on our schedule. It was the last regular-season game we were scheduled to work, pitting Denver against San Antonio. Denver had lost a game a few weeks prior because of a mistake made by the referees, a loss that could be the difference between them making or missing the playoffs. Bavetta told me Denver needed the win and that it would look bad for the staff and the league if the Nuggets missed the playoffs by one game. There were still a few games left on the schedule before the end of the season, and the standings could potentially change. But on that day in Oakland, Bavetta looked at me and casually stated, 'Denver will win if they need the game. That's why I'm on it.'" 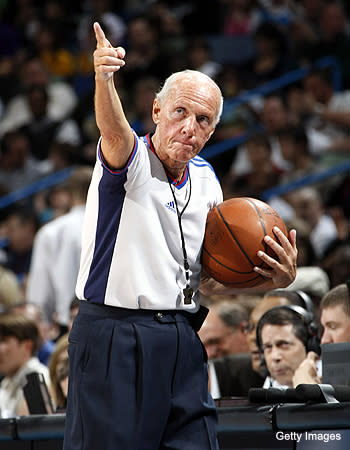 "I was thinking, How is Denver going to win on the road in San Antonio? At the time, the Spurs were arguably the best team in the league. Bavetta answered my question before it was asked.

'Duncan will be on the bench with three fouls within the first five minutes of the game,' he calmly stated.

Bavetta went on to inform me that it wasn't the first time the NBA assigned him to a game for a specific purpose. He cited examples, including the 1993 playoff series when he put New Jersey guard Drazen Petrovic on the bench with quick fouls to help Cleveland beat the Nets. He also spoke openly about the 2002 Los Angeles-Sacramento series and called himself the NBA's 'go-to guy.'

As it turned out, Denver didn't need the win after all; they locked up a spot in the playoffs before they got to San Antonio. In a twist of fate, it was the Spurs that ended up needing the win to have a shot at the division title, and Bavetta generously accommodated. In our pregame meeting, he talked about how important the game was to San Antonio and how meaningless it was to Denver, and that San Antonio was going to get the benefit of the calls that night. Armed with this inside information, I called Jack Concannon before the game and told him to bet the Spurs.

To no surprise, we won big. San Antonio blew Denver out of the building that evening, winning by 26 points. When Jack called me the following morning, he expressed amazement at the way an NBA game could be manipulated. Sobering, yes; amazing, no. That's how the game is played in the National Basketball Association."

Based on the posted excerpts, which I recommend you read in full, it looks like the entire book is written in vague accusations, hearsay and rumors. Of course, this is exactly what I'd expect from a guilty party.

Look, I'm sure there's some truth to Donaghy's accusations — though, like Dave at Blazersedge, I don't trust him as far as I could throw him if he were tied to a hippo — but it sure reads like a desperate man trying to push the attention away from the fact that he's a cheater and a criminal.

At any rate, the whole thing makes me sick.

What do you think?