As the debate continues over whether or not the Atlanta Falcons need a new stadium, a new side argument has popped up down in Georgia: Namely, is it worth the extra cost to make sure the new place has one of those fancy retractable roofs like the Houston Texas, Indianapolis Colts, Arizona Cardinals and Dallas Cowboys do?

The current plan on the table is a $1 billion project that could be financed with about $200 million worth of public bonds. It only includes an option for a retractable roof and estimates peg that roof's cost at around $185 million. A fixed roof has not been included in these discussions, but it would no doubt be cheaper without all the cost of machinery.

Falcons ownership seems set on a retractable roof stadium — remember the Fulton County Stadium days? — but the odds say they'll be keeping it closed more often than not. A study by the Atlanta Journal-Constitution found that 149 of the 225 NFL games that have been played in the league's four retractable roof stadiums have been conducted with the roof closed. That's 66 percent of all contests.

From the Atlanta Journal-Constitution:

Those teams’ open-or-closed decisions contrast with the Falcons’ stated intentions for games in their proposed facility. 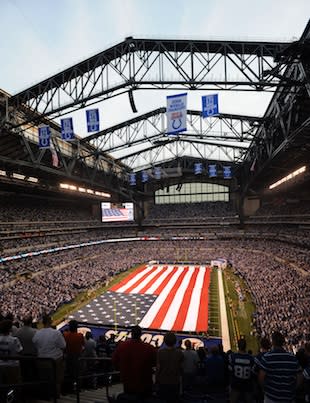 “We believe football was meant to be played outdoors to the extent it can be played outdoors,” Falcons president and CEO Rich McKay said recently. “And therefore we would tell you today we intend to have it open a lot.”

That stance is in keeping with Falcons owner Arthur Blank’s original preference for a roof-less, open-air stadium. But the intentions would be tested on a game-to-game basis by the tempting flexibility of a retractable roof, which the proposed stadium must have in order to also accommodate events that require an indoor facility. The stadium’s design will be key in how the Falcons ultimately use the roof, McKay said.

It's not an easy decision of course. While the weather in Atlanta is conducive to an open-air stadium, the city wants to continue hosting Final Fours and big college football games. It'd also like to lure the Super Bowl back. The big event hasn't been held in the city since an ice storm hit the city while it was hosting the Super Bowl XXXIV between the St. Louis Rams and Tennessee Titans.

What's the right ratio of open to closed games that would make the retractable roof worth the cost? There probably isn't a definitive one. And people forget that NFL games aren't the only events being hosted at these facilities. An open-air stadium is more conducive for soccer matches, early season college football games and big concerts (all weather permitting, of course).

Sure, a retractable roof costs a lot of extra money. But so do things like luxury suites, expanded fan shops and state-of-the-art turf systems. In the year 2013, a retractable roof is firmly ensconced in the set of upgrades and just one of the many reasons a team like the Falcons would want to take flight from an otherwise serviceable Georgia Dome.

Financial logic went out the window a long time ago.