Sure, we've seen this story before.

College football player finishes his eligibility, but returns to the stadium that made him famous to propose to the girl of his dreams. Yes, it's a cliché, but former Penn State linebacker Nate Stupar, who is preparing for the NFL combine, added his own twist.

Instead of simply taking his now-fiancee Marissa Lower to Beaver Stadium and dropping to one knee, Stupar sent her on a scavenger hunt through State College, Pa., using notecards as clues and his brother as her guide, to find him and ultimately her engagement ring.

Thanks to StateCollege.com for providing the details:

When Lower got home from church, she found a card on her windshield that read, "I'm at the place where we first danced the night away."

Escorted by Stupar's brother Rob, the two drove to the downtown club formerly called The Cell Block, where another note was hanging on the door.

"Sorry, you're too slow. I went to the place that we first kissed beneath the stars." 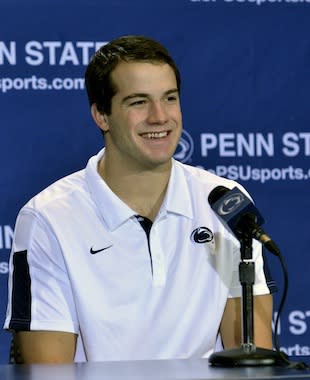 Set up in a park was a blanket with another note instructing Lower to go to Chili's, where the hostess gave her another clue to go to her cousin's house.

There rest the final clue: "I guess I'll go play tackle by myself unless you want to join me. I'll be where I performed in front of 110,000 people."

When Lower pulled up to the players' entrance at Beaver Stadium, a trail of rose petals led her into the tunnel, where she saw Stupar holding a bouquet of flowers.

Lower actually thought she was chasing her Valentine's Day gift and not an engagement ring and was surprised when Stupar proposed.

"It surpassed my expectations," Lower told the website. "I couldn't even think of planning something out in my head like this. He did a fantastic job."

Unfortunately, the happy moment was short-lived as Supar had to get back to training for his shot at the NFL. However, he did culminate the day with a fantastic tweet.

Got engaged to @MarLow02 today but leaving for Pittsburgh to get back to training. #nfldraftproblems

Ah, Valentine's Day. It's making us such softies for love songs and love stories. Don't worry, it's just one day.