If you wanted to talk with the first enrolled student of most Sweet 16 schools you'd need a seance. Louisville, the oldest school still left in the tournament field, was established in 1798. Wichita State, the second-youngest school, came on the scene in 1895.

Florida Gulf Coast, however, admitted its first class in 1997. Which means that not only is its living alumni base rather tiny, but that it's possible to track down the first student who was ever accepted through its now-famous doors.

And that's just what Mike Lopresti of USA Today did.

Her name is Mariana Coto-James. She was admitted to the new school in January of 1997, earned her degree in nursing among a first class of 2,548 students and is now a nurse educator who lives in the Orlando area.

She also wasn't much of a college basketball fan before last weekend. 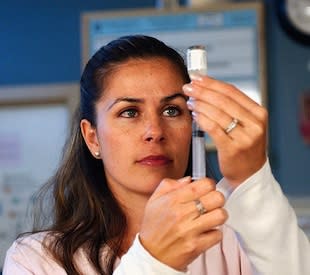 "I didn't even know this was going on until my mother and sister called," Mariana Coto James said over the phone Tuesday from Orlando about her alma mater's trip to the Sweet 16 to play Florida. "I feel obligated. I'd better watch that game. I'd better tune in quickly."

As for her status as the school's first student?

"It's something I'm proud to talk about, because it can only happen once in lifetime, and not to too many people," she said. "It doesn't happen that often that a university is built from the ground up."

Coto-James says she'll be rooting for her Eagles when they face off against instate rival Florida in the Sweet 16 on Friday night. She'll be joining a bandwagon with a lot of newfound friends, but no one will have a cooler claim to fame than she does.

Here's a feature the Naples News did on Coto-James back in 2007 for the school's 10th anniversary.